THE CATHOLIC PARISH OF OUR LADY AND ST. NEOT, LISKEARD, CORNWALL WITH SALTASH, SCLERDER ABBEY AND TORPOINT

A little bit of History ​ 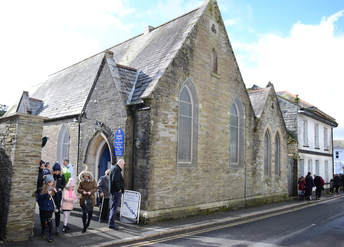 Christianity was brought to Cornwall in the 5th century by St Piran and until the Reformation, Catholicism was the religion of England and Wales.  However, after the Reformation of the mid-sixteenth century, the celebration of Holy Mass was forbidden and Catholics were persecuted until the act of Emancipation in 1829.  A French priest, Fr Marc Oleron arrived in Cornwall in the 1830s and travelled around the towns and villages, linking up with Catholic families.

In 1843, the first Mass was celebrated in the newly built church at Sclerder in Talland parish on land owned by the Trelawney family.  Two years later, Fr Oleron was saying Mass in a newly acquired house in West Street, Liskeard.  Part of the house was converted into a hall, which was used as a chapel on Sundays, and on weekdays as a schoolroom for the growing number of Catholic children in the town.  Over the next twenty years, a Francsican priest from Sclerder would ride to Liskeard each Sunday to say Mass in this early chapel. The arrival of families fleeing the potato famine in Ireland and finding employment in the copper mines on Caradon Hill put pressure on the small building.  As a result, the present church was built in 1863, to the design of Joseph Hansom, of Hansom cab fame.  This new building was supplemented in 1886 by a schoolhouse alongside the church, which is believed to be the current St Neot Room.

The church was further extended in 1948 over the site of the original priest’s house, when today’s sanctuary was built.

Within the entrance porch, the Holy Water Stoup has a most unusual design.  On the front is a face with a water spout and it is claimed in the 1889 edition of Kelly’s Directory, that it originated from the Holy Well at St Cleer.
​

Our Lady of Liskeard ​ 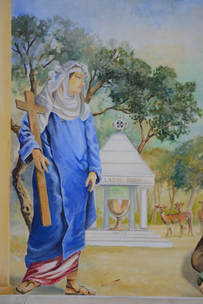 From the earliest days of Christianity in Cornwall, Mary the Mother of Jesus was revered in Liskeard under the title ‘Our Lady of the Park’. A shrine to Our Lady had been established over a well, in a valley below the town, close to a tributary of the East Looe River.  A chapel was subsequently built and became a flourishing target of pilgrimage in mediaeval times. Pilgrims travelled from miles around to worship here, arriving down the Mass Path, from what is now Old Road.  Many people were baptised using the flowing waters in the baptistery, the remains of which can still be seen.

Following the Protestant Reformation under Henry VIII, in the 1530s, in common with other traditional places of worship, the shrine was destroyed and little remained to show that it had ever existed.

In 1998 Liskeard's mural in Pig Meadow Lane was painted featuring the key events in the history of the town and surrounding area. Our Lady of the Park features on the mural, holding a cross, in front of a shrine, containing a chalice, with the inscription Unity. The shrine is marked Ladye Park and deer are alongside the shrine, reflecting the long established deer park.  The Virgin Mary is the earliest recognisable figure on the mural, reflecting how the holy shrine existed since the earliest days of Christianity in Cornwall.

Ladye Park is now a private residence on the edge of town, but we are privileged to have, on display in the St Neot Room, an icon that was specially painted to honour Our Lady of Liskeard. 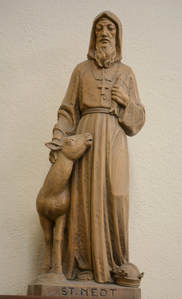 St Neot was a contemporary of King Alfred who was devoted to wild animals. Some sources say that he was born in the parish in around 820AD, others portray him as an Anglo-Saxon, who studied first at Glastonbury and then retired to Cornwall to become a hermit.

He was a good and learned man and is reputed to have stood daily in the Holy Well at the nearby village now known as St. Neot, to recite all 150 of the Psalms. Legend has it that by the revelation of an angel he was promised a permanent supply of fish from his well if he swore to only take one fish a day. Some while later he fell ill and his servant Barius went to the well and took two fish. He cooked them and took them to his master. St. Neot ordered that the two fish be returned to the well where they were miraculously restored to life.

The saint died and was buried in the village at some date after about 865.  However, in around 980, the remains of St Neot's body were removed from Cornwall to Eynesbury in Huntingdonshire when a monastery was founded there (renamed St Neots in his honour).

St Neot is revered in the name of our parish church.
​ 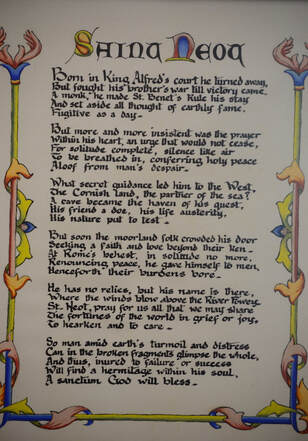